Add to Lightbox Download
22.12.2017; London, England: PRINCESS MICHAEL OF KENT APOLOGISES FOR WEARING BLACKAMOOR BROOCH
Princess Michael of Kent has apologised for wearing a ‘blackamoor’ brooch to the Queen’s Christmas lunch at Buckingham Palace, attended by Prince Harry’s mixed race fiancée Meghan Markle.
The statement issued thriugh her spokeman said “ The brooch was a gift and has been worn many times before.'Princess Michael is very sorry and distressed that it has caused offence.'
The wife of the Queen’s first cousin, 72, was pictured wearing the accessory as she arrived at Buckingham Palace. The decision to wear the brooch drew criticism due to Meghan Markle’s biracial background (her mother is Black and her father is white) — and the fact that Princess Michael chose to wear it on the day Meghan was being introduced to many extended royal family members for the first time.
“Blackamoor” is a genre of art or jewelry originating in 16th century Venice that has been criticized for promoting imagery that is considered racist. Many blackamoor figures portray exoticized images of servants and slaves of African descent.
This isn’t the first time Princess Michael, dubbed “Princess Pushy,” has made headlines for her controversial behavior. She was accused of racism in 2004. While at a New York restaurant, she was said to have told a group of African American diners to “go back to the colonies.”
Picture shows: Princess Michael of Kent wearing the blackamoor brooch when she attended the Chritsmas Party at Buckingham Palace on Wedneday.
Mandatory Photo Credit: ©Francis Dias/NEWSPIX INTERNATIONAL 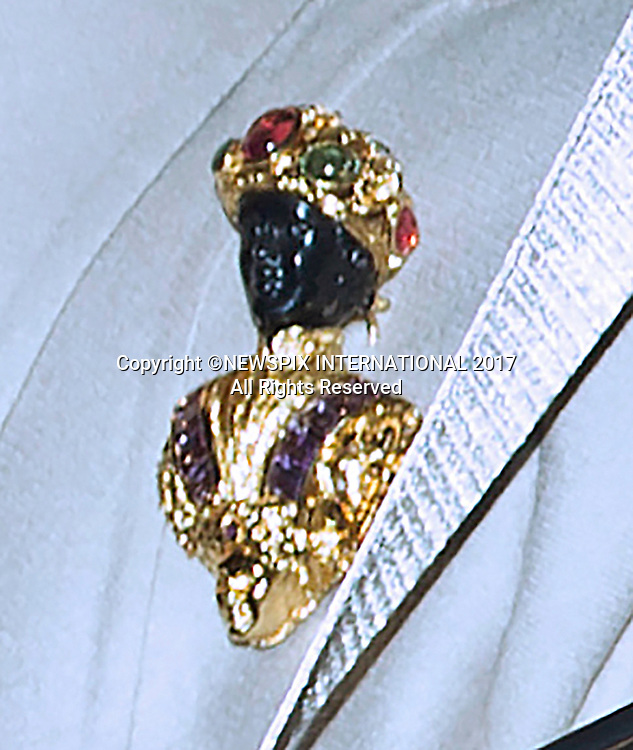